back to Auckland Issues

EMAIL SENT TO MAYOR GOFF AND ALL COUNCILLORS 29 APRIL, 2020

Please take care of the people!

1. Please do not increase rates at a time when many people are struggling. It is totally unnecessary. We can have a vastly better city with wiser rather than bigger spending.

2. Please introduce managed community gardens where those struggling can put in 4 hours of 'sweat equity' and receive a credit equivalent to four hours at minimum wage to be taken in fresh food. This should be enough for a family of 4 for one week and will provide people with the dignity of earning their food rather than receiving a hand out from a food bank and take some pressure off the food banks. THIS IS URGENT. Whanau te Mana Whakaora provides a much better model for encouraging people to self sufficiency than putting struggling people into motels - albeit that is better than leaving them on the streets as has been past practice.

3. Please introduce Supermaxx or explain to me why not. Supermaxx will lower the cost of travel to commuters to $70 for 30 days unlimited travel between Albany and Papakura AND save over $100 million per year in operating subsidies.It will provide a vastly better interconnected service to the commuting public than AT provide. See attached schedules which would provide a much better and cheaper service in lockdown. Supermaxx will massively reduce congestion and pollution.

4. Please declare that all public transport buses coming into the central city must be electric powered by 2025. (It is easily possible under the Supermaxx network) and that no private fossil fuelled vehicles will be allowed in the inner city after 2027. Also install more electic car charging points in Council owned parking buildings.

It is hypocritical to declare that you care for the people and then
A. Increase their rates and other regulatory costs.
B. Don't provide the opportunity for people to help themselves be as self sufficient as possible. C. Refuse to provide the best possible public transport at the lowest possible cost
D. Declare a climate emergency and not take all possible steps urgently to reduce pollution.
E. Blindly continue the obsession with old fashioned forms of public transport such as light rail.

We are in an age of austerity with a huge opportunity to move outside the visionless, archaic, and very expensive thinking of the past and examine new ways of doing things and implementing them when shown to be better.

The big issues for Auckland Council to deal with.

** Save over $100 million per year in operating subsidies

**  Redesign the network so that people can esily commute around the city and to the airport instead of just into and out of the inner city.

**  Reduce pollution and congestion in the inner city drastically

It can be rolled out across the city within 6 months using the current equipment and at a total cost of implementation of $1 million. It will save $2 million a week in operating subsidies from the time it is fully implemented. Successive Councils and Auckland Transport have refused to implement Supermaxx, or prove it wrong, andf have cost ratepayers/taxpayers over $1 billion in excess subsidies and commuters a similar amount in excess fares.

It is utterly hypocritical to declare a 'Climate Emergency' and refuse to make the basic changes that would make a real difference to our carbon emissions. The refined Supermaxx network actually provides 20% more capacity with 200 less buses reducing carbon emissions by 18,000 tons per annum. In addition to that would be the massive reduction in emissions and congestion as commuters move from cars to public transport with much better schedules and network, and hugely reduced fares.

Battery charging facilities should be expanded in all council owned car parks. Fossil fuel private cars, buses,  and light vans should be banned from the inner city within 7 years.

Implementing the Supermaxx network will reduce congestion in the inner city with fewer buses operating more frequently on a highly refined network.. It will greatly encourage people to move from car to public transport further reducing congestion and pollution.

HOMELESS IN THE CITY

It ib absolutely reprehensible that Phil Goff and his Council have been willing to let people rot on the streets of Auckland, especially during the winters. There are solutions they have refused to implement even as they have spent .millions on 'studies'.

What are my qualifications to write on Ports of Auckland and other transport issues?                       My first full time job was with the Union Steamship Company of New Zealand from 1959 to 1969. This included 3 years in their Christchurch and Lyttelton offices and 6 years at sea as a Purser including 2 years on the overnight steamer express between Wellington and Lyttelton, 2 years on the South Pacific run to Fiji, Samoa, Niue, and Tonga, and 16 months to South Asia including Singapore, Malaysia, Calcutta, Bangladesh, and Sri Lanka. Over  6 months of my life has been spent tied up at Captain Cook and other wharves in Auckland between voyages! My 2nd job was working for Air New Zealand while I obtained a private pilots licence and since 1970 have been involved in tour operating including owning and operating tour vehicles and developing the "Connoisseur" deluxe rail service in the South Island. I have learned a lot about transport in the past 60 years! More importantly I have a lot of experience in all transport modes. My extensive travels as a tour operator have enabled me to experience public transport in many cities around the world.  My crowning joy is SUPERMAXX which Auckland Council and Auckland Transport refuse to introduce and have cost Aucklanders over $1 billion in excess subsidies and fares.

To claim that shifting the whole of Ports of Auckland to Northport is a viable option is totally stupid and breaks the very first requirement of an efficient transport system which is that the lines of transport should be kept as short as possible.  It makes a mockery and is totally counter to any effort at reducing emissions from transport. It is almost as stupid as believing that a viable new port could be built on the rugged West Coast or in the Manukau Harbour as suggested by the Port Future Study. The last study on this issue was a highly corrupt document.

However, Aucklanders would like to make more people friendly use of the prime waterfront land occupied by the port and the congestion and pollution caused by the mass movement of freight from the wharves to South and North Auckland stopped. It is somewhat hyprocritical however to want more use of the wharves occupied by Ports of Auckland when Auckland Council cannot even develop Queens Wharf for the benefit of the people!

Congestion and pollution in the inner city could be much reduced almost immediately by running a car carrying or container carrying  train every 10 minutes on the eastern line from the wharves to Westfield and the inland port slotted between the 10 minute passenger service provided by Supermaxx during the day and 20 minute service in the evenings. There are no technical reasons why it could not be done now.

The days of excessive growth for growths sake and conspicuous over consumption are over. We have to learn to stop thrashing and trashing our planet and live within a lower pollution and congestion footprint.

It may be that the volume of goods shipped in and out of Auckland will reduce, not increase, and the Port could live within its current footprint. However that does not return the port to the people therefore it is wise to have a medium to long term plan to shift it.

The Port Future Study did identify possibilities in the Firth of Thames. The suggestion of building a new port at Waimangu Point makes a lot of sense. Deep water comes closer to the shore there, It is far enough north of the Miranda bird sanctuary not to affect it, a 4 lane highway and 2 track railway can be (relatively) easily built through the Ness valley directly into South Auckland with a second route from Waimangu Point to join SH1 and SH2 south of the Bombay Hills. The lines of transport are minimised with consequent reduction in pollution and congestion and it is closer to the Auckland-Hamilton-Tauranga triangle.  Land should be designated NOW and a basic plan and prograrmme developed so that there is certainty for the future.

In the interests of resilience and catering for the burgeoning exports from Northland berthage at Northport should be extended by the 270 metres planned and 2 container berths offered there to provide resilience and capacity in our transport system. 15 years ago I did a complete exercise in using Northport for a fast express container service Sydney/Northport/California and another one Melbourne/Northport/US East Coast. That would work well with distribution throughout the country primarily by feeder shipping services. The sea is there, it is free, it is uncongested, and it doesn't require maintenance! Coconut diesel powered ships would minimise greenhouse gasses.

The $96 million allocated to upgrade the rail line from Auckland to Whangarei is a good investment and shoud be done as soon as possible to assist the development of Northland and reduce freight on the roads.

One of the big problems at the moment is the weird and messy ownership of Northport and competition between Auckland and Tauranga. It will need common sense and government intervention to bring all ports under an effective ownershop model which allows development for the maximum benefit of the country as a whole. The ports (land or operations) must not be sold into private ownership.

Once Northport has the extra space it is quite possible that Bledisloe container terminal could be returned to the people and used as a cruise terminal and people park. There is no excuse for Marsden wharf not having been taken out and Captain Cook wharf returned to the people by now. There is also no excuse for Queens Wharf not to have been turned into a fabulous people space by now. Take the ideas from the Queens Wharf competion in 2009 and blend them into a better result.

I have been advocating for years that as part of the sea wall strengthening Quay St should be undergrounded from Commerce St to Hobson St to make a fabulous pedestrian plaza from Customs St to the waterfront, with vehicle access points to the wharves. This could have been paid for by the Commercial Bay 'purchase' of part of Queen Elizabeth Square.

The only reason we do not have a fabulous functioning enjoyable waterfront and a long term plan for its development by now is the failure of Auckland Council. 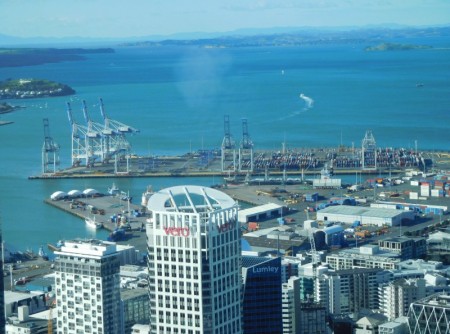 Should Ports of Auckland be moved. If so where to?